A number of friends among the intellectual youth suggested that we establish a printing house to publish works that would in general serve our cultural cause and to take special care of new publications. This would include educational books taking into account that educational activity is no longer insignificant and that the traditional as well as the modern schools very often search for primary level educational books and can't find them anywhere.

This printing house will also publish new books by Moroccan authors whose dissemination would offer material incentives and pride (to the authors).

They also propose that we work together to establish this printing house and to work jointly to share the tasks so as to allow one or the other to leave on a mission to Cairo or elsewhere while the printing house can remain open to pursue its publications.

After careful consideration I found the proposal in principle of interest and acceptable. We have fixed for a first phase the capital required to be 25,000 Francs to be split into 25 shares each worth 1000 Francs. I personally undersigned 5 shares for a total of 5000 Francs. My associate has done likewise and signed up for 5 shares.

You have mentioned to me in a number of our discussion and in writing in some of your letters that you envisioned initiating a project analogous to this one and that you have found common ground of agreement with some associates. That affair remained suspended because of your travel abroad.

So here I submit to you the same proposal again. We would be very happy if it is possible for your to participate and become a member of this project. The study of the business plan for the moment will remain confidential between us. When we reach a satisfactory result we can proceed to announce the launch of our new company.

Three days ago I began proofreading the book as well finalizing it and making it consistent with several references. I take this opportunity to inform you that the two printed copies using lithography contain errors and metatheses.

But these difficulties will be ironed out and the necessary corrections will be made. I have established a reference database. I have been revising the documents in hand for the past month and I have indexed these revisions to facilitate my task.

Where are you with your work? Did you discover anything in the European copy? Is there anything new? In the event you find items that may help me in my work, I ask that you make them available to me as soon as possible.

... Hachmi Filali has sent a letter addressed to you and we have opened it. He asks you to send him "The history of the Almohade and Hafsid dynasties" by Zerkachi. He criticizes your brother Abderrahman for not noticing several errors in the corrected paper sent to him. Abderrahman intends to recover from this inadvertent negligence and will personally correct what there is that is required. The matter is therefore at this stage.

As for the person in charge of setting the print, I paid him the amount required for one page and he gave me a receipt for the advance payment you sent him.

I am sending today a second page to our friend, Filali, for him to begin to work on. I also sent him a letter in response to what he sent you.

... With regards to the person responsible for print setting, he never ceases to miss deadlines and during all this time he only returned to us two leaflets. These I sent immediately to our friend Filali who found more than two dozen errors. I brought this to the attention of your brother Abderrahman and he expressed much regret and promised to correct the latter on a printed copy.

In addition Abderrahman was faced with several difficulties with regards to the original (proposed) text and had to resort back to the (ultimate) source by Ibn Khaldoun where he noted a big gap between the two sources. I asked him to limit himself to the copy he was asked to review. I wrote to Mr. Filali on this matter to make him aware that cause of our disagreement surfaced after the leaflet was printed and that it was no longer a matter of restarting the review work since its inception and ordering a (totally) new print. At the very least this mishap will serve as a lesson for the future.

Mr. Filali informed me that he has chanced upon a manuscript that he believes is originally Andalusian and starts at the same period of time as Volume 2 on which he was working.

As for the printing house, it is imperative that you do all you can to obtain the necessary information because the project we have initiated requires specialized printing (capability). That objective can not be reached with the lack of infrastructure needed to support the employees and thus does not allow neither the appropriate organization of work nor respect for details agreed to with customers.

I have received your letter after a long wait and I hope that this (delay) will not repeat again.

I was very happy to learn that the printing house is taking care to make corrections and that your brother Abderrahman has not found many mistakes which certainly make his verification job easier.

As for the unfinished paragraphs a the bottom, it was not possible for me to complete them because of the narrow margin and the significant number of corrections made to the original text. This is what prevented me from completion of the missing parts without adding more confusion and ambiguity to the basic text.

I have been thinking about a method that I intend to work with on the second volume which I have been working on for the past week.

With respect to the next installments they will reach you with my comments within the next two to three days. I took care in order to ease your task to re-copy everything and I included new corrections in the spots where they should be printed,

Please find in the attached some of the references which I have used to re-transcribe the first volume with my comments inserted. I have not sent you all the references because their enumeration would take too much space. At a secondary level those I have sent you consist of all the essential references. I have also enclosed the basic characteristics of our font for your information.

That all that comes to mind with regards to this matter. I believe that this is all that we agreed to achieve together. However if you have other suggestions I ask you to pass them on to me.

Finally I am waiting for what has been printed so far and I ask that you sent me a copy of the announcement in its final form before it is made publicly available.

The Moroccan Publishing Company will issue a new edition of the book "Al Qirtas" which includes a directory of the reigns of Moroccan kings and a history of the city of Fez).

Among the new characteristics of this edition: beautiful print, glossy paper, commentaries that double the number of pages of the base work, comparative analyses provided by the editor and by other historians, naming accuracy, and several other additions relative to the preceding editions.

This edition will be issued in three volumes:

All questions should be addressed to the agent of Said Hajji's Moroccan Publishing Company, Salé, Morcco.

Please find attached five pages addressing pages 107 to 144 of the original version and consist of an assortment of comments. All I ask of you is to take particular attention to the corrections.

I have received the one page response but have not yet had time to read it. I will do so this very day. I look forward to the others.

I will send you the rest during this week. I ask you to respond without long delays in the future.

The police are making inquiries about the publishing company, its financial sources and its management.

A wealthy merchant who goes by the name of Haj Mohammed ben Abdeslam Lahlou was alleged to be the owner.

And hence it appears to me that the company's bylaws and statutes need to be submitted so they can be properly registered to erase any ambiguity and allow the printing house to contribute to the (national) economic development by facing its tax obligations.

I ask you to inform me on what you have decided with regards to my personal affair and I reiterate my wish that you agree to be my agent.

(Letter sent after the death of Mohammed Hassar on August 25, 1936)

I have received you letter with regards to your plans for the creation of the "Al Maghrib" newspaper.

I am totally in agreement in principle and I don't believe there will be any money issues for what we wish to undertake. Hence you can pursue your plans and we shall meet when you have finalized your planning.

As you requested I will not fail to write something in commemoration for our deceased friend Hassar.

Please find an attached letter from (the city of) Taza which at the least requires a few corrections. The author of this letter is a student who had promised me to persevere with my assistance in improving his correspondence. I will look at it again from an editor's perspective when time permits.

So long and cordial greetings

... I am fully back at work. Very soon you will have the rest of Volume 3. 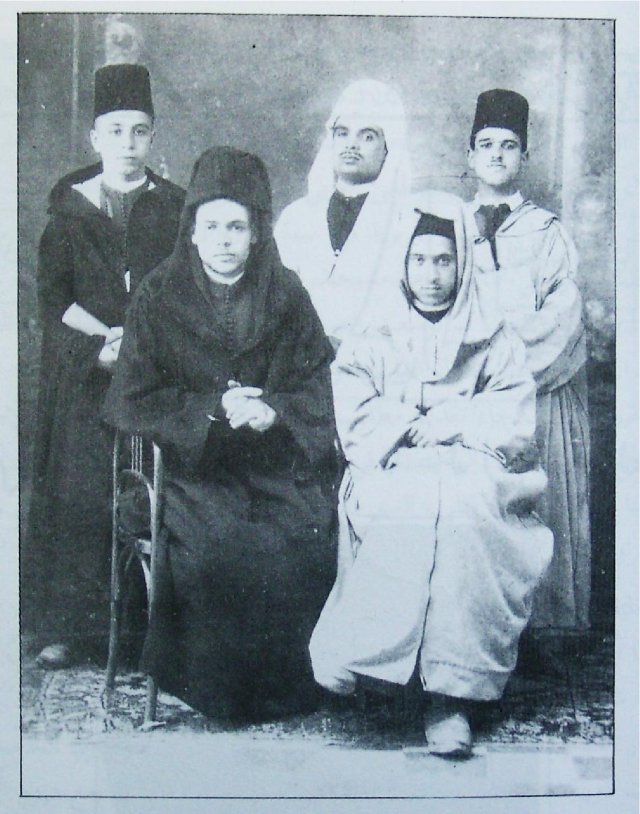