Rebirth of a project

The circumstances wanted that this newspaper revives 10 years after the death of its director Said Hajji which struck with dismay all together Morocco, the active youth and the free press. All have regretted the loss of one of the most dynamic pioneers of the National Movement, who counted among those who spent their life struggling to recover the despoiled rights of their country. Some of these pioneers are not any more in this world, others wait until the faith reserved to them is accomplished without changing an iota in their rules of conduct.

The direction of the newspaper hoped to publish the first issue of the new series at the day of the 10th anniversary of the death of its founder as well in testimony of its fidelity to his memory as in spirit of continuity which links in the same undertaking the quick and the dead. But, for reasons completely independant of its will, it could not carry out this wish in all its plenitude.

Although 10 years have already elapsed since he passed away, his friends and companions - and God knows how numerous they are - are still afflicted by his departure, and keep of him a renewed memory.both in their heart and their mind. They do remember every now and then the promptness of his spirit and the fervour he used to put in all his activities, verbally or by acting. He left a legacy which will never be erased, whatever the length of time.

But, he also left a vacuum which is very difficult to fill in his hive of activities.Today, we notice more than ever this vacuum in all its extent.

In which field among the spheres of activities which attract the youth did he not represent the voice of the reason? He took part in all the struggles during the very short period of time that he passed on earth.

He was a man of letters, a politician, a journalist, a thinker who was quoted in example each time complicated and tanglened up problems emerged and to which it was necessary to find practical and relevant solutions. He owed the priviledged place he occupied among his friends to his intelligence and perspicacity as well as to his character which rejected the numbness and lassitude. and to the great experiment which he acquired and that many people of a more advanced age as his would be happy to possess,

He was an autodidact in the full sense of the word. Since he was a young boy, he emerged in the circle of his friends and was distinguished from all of them by his inclination towards the seriousness and the reflexion on the most difficult questions among those from which suffered the Moroccan society and which required a permanent search of ways and means to find adequate solutions to the problems to be answered or solved.

All those who used to frequent him detected at his place a continuous movement, an extreme seriousness, an ordered spirit always arguing for the continuation of his ideas and a strong capacity of creation and innovation.

Said was a man who confronted many simultaneous projects that he imagined very vast and full of obstacles and difficulties. He worked out the plan of each project very carefully and started to realize it step by step avoiding all kinds of interruptions which might prevent him from finishing the work he had proposed to achieve and establish on solid bases.

Thus was the way Said acted in many spheres of activity, either for his own account or in participation with others. The difficulties did nothing but reinforce him in his determination and quickly dissipated in front of his great strength of will. It is difficult to imagine that a young man who lived only 30 years in a society like ours, strewn with obstacles, exposed to a painful climate of frustration, could in spite of these inconveniences, create an editing and publishing company, a daily newspaper, a printing press with adapted equipment, a monthly review, without counting the literary supplements and his writing participation in various reviews of former publication.

He succeeded in all what he undertook despite the little means he had at his disposal. When he achieved the realization of a project, he started at once to plan the next one, being aware how much his fellow citizens needed to move forwards in all the fields, and especially in the intellectual domain. He sowed the good grain so that it would rise and give its fruit, was this at a later stage.

What he actually undertook had the merit of exerting an important and lasting influence on the formation of the character of the rising generation which proved to be faithful to its engagements towards him by transmitting to each other the torch he carried all his life long. The team involved in the administration of "Almaghrib" is more than ever welded into the spirit of the founder of this newspaper, to contribute to the revival of this modest project that Said Hajji predicted in the editorial of its first issue that it will aim:

"before and after all, that this nation lives on a level of dignity worthy of its present and its past and in perfect symbiosis with the will of renewal clearly expressed by its members, and moves forward towards the way of the development like the other nations which reached high degrees in the field of civilization and real progress."

By making every effort to ensure the revival of one of Said Hajji's projects, we hope to succeed in returning a part of the recognition and the loyalty that we owe him. 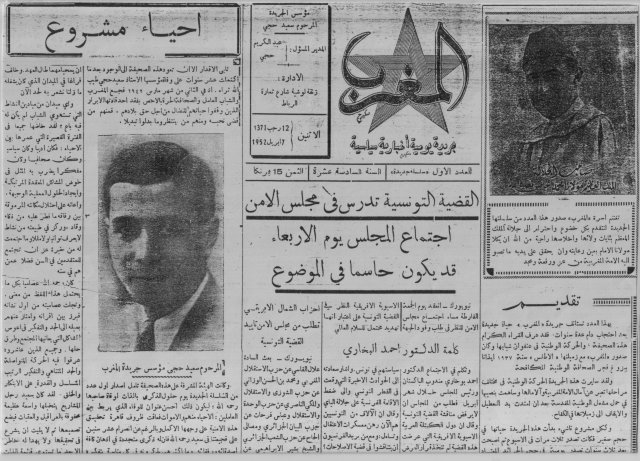