Reflections on a commemoration

Many are those who pass on and their absence has only an insignificant impact on their immediate milieu. Then, after a few days, their memory fades away and all that remains on this earth is a narrow tomb where the living lose sight of them. Of their life nothing endures. The ties that bind them are completely severed. Those living continue on unperturbed; carrying on with their lives after dialing back the memory meter to zero. They resume life's journey on their little train going about their business and enjoying their pastimes as they did before the loss. They find their energy in distractions like times past, making the best of the vacuum left by the death of one their own.

On the other hand, there are those rare among humans, whose passing is the pretext for national mourning, for bringing tears to all eyes, sweeping all homes into a sense of deep distress and for impacting with consternation the whole nation. The secret behind this phenomena is due to the fact that these rare dead persons did not belong only to themselves, rather they are an indivisible asset common to all people of the nation. Each member of this big family claims in equal parts that the deceased as one of their own, be they a relative or a distant acquaintance, an intimate friend, or even someone who has no pretense of familiarity with the deceased.

And so this event is when the national consciousness awakens. It only does this in circumstances of this gravity. It deplores the loss of a being to whom one is not united by kinship or by family ties but by moral bonds that the Creator established between society and one of its members; one who is totally devoted to their society and serves it with full fervor. The love for the deceased, once submerged by thousands of hearts, manifests itself via the deep emotions and laments that arise from bruised hearts as well as from downfallen looks plunged in deep torpor.

It takes only a blink of an eye, the time of the fatal passing, for the soul to remove the tarnish of its bad instincts, to cleanse itself from the viruses of resentment and hatred, to break loose from vain pleasures and deceit and to accompany the deceased to their final resting place in a climate full of veneration, deference and dignity. This short instant of time does not belong to the temporal space we are used to. This is a trigger pulled in the world beyond, in a world of perfection, purity and brotherhood where the soul returns to its original source without being troubled by the ignominy due to bad behavior or being tempted by sordid or petty cravings.

We are in front of a spectacle... and what a spectacle! A dense and compact crowd marches behind the coffin, united by pain, their spirits nearly exhausted, eyes brimmed with tears, profoundly affected by the twist of fate and anguished by the brutal harshness of adversity.

Like a child who cries out to his mother, the tearful crowd prays to the Almighty to take our dearly departed into His Holy Mercy. That is how the crowd followed your coffin, Said, while you headed to meet your Maker. It was a crowd of people who knew you; one that was affectionate and appreciative of your true value. They were shocked and grief stricken after hearing about your death.

All had broken hearts and the haggard looks of one living a nightmare. Never have they had a loss more cruel or a more terrible misfortune than the ones they felt after your sudden passing. Some among them have lost in you a sincere friend; others lost a loving brother and all of them lost an active, hardworking and serious man. They are full of praise for you; they never cease to lament that you left without notice and recall in good memory the most intimate aspects of your precious and cherished life. Savor your sojourn with Allah.

"He for whom all agree to speak well are assured access to paradise." 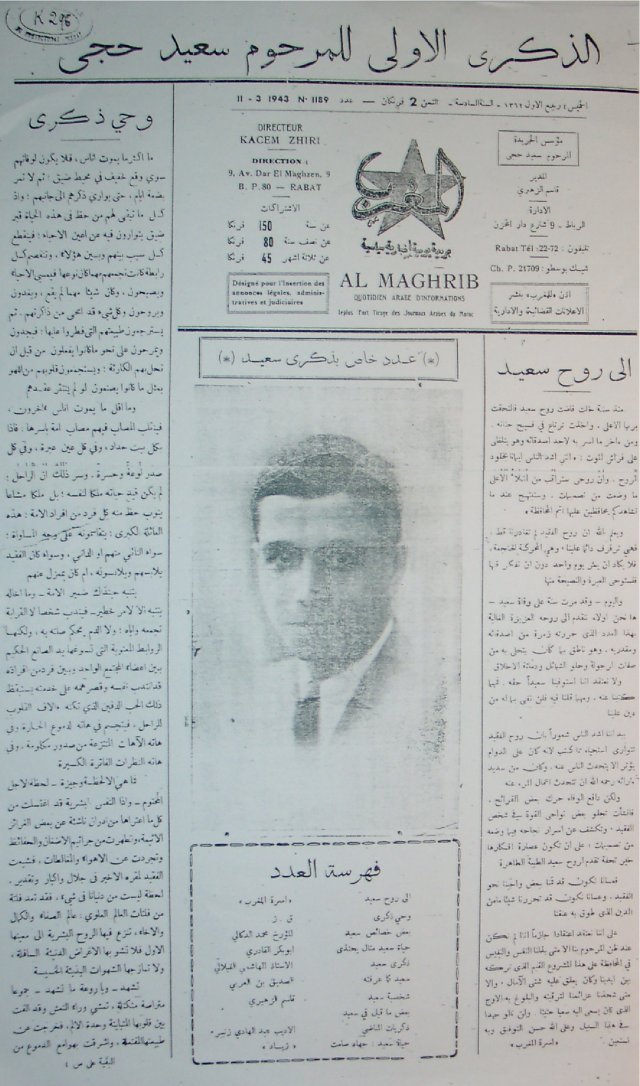