Five months only have elapsed since our brother Said Hajji passed away, and here is the review "Al Taqafa Almaghribiya" reappearing after being almost buried in the beauty of its youth and the charm of its grace. Said died, but the duty implacably invites to respect the appointment which we took to manage together this cultural project after having completed to establish the bases of the daily newspaper "Almaghrib." As regards this project, we were two parts of the same heart beating for a same cause and a common objective, namely to put ourselves at the service of this country. Our road companion has gone, leaving us in front of several ways. We were disappointed in our hopes, our confidence in the future was shaken, the despair gained the heart of whom never doubted of success . But, at what time! At a moment during which he supervised the crossroads. Three ways were offered in front of us, and we had to choose among them the one which leads to the right direction.and to take care not to choose the ones which would lead us in a false orientation. But now that the security cord extends under my eyes, I clearly distinguish the accessible way and those which me must necessarily avoid.

One of these ways is very broad and is bordered on both sides of huge trees which give some welcome shade from the sun. Only the cars of rest and pleasure have access to this road.

The second way, marked by soft slopes and romantic deviations incites to ask for help in all what one undertakes. Some find in this way sources where they can quench their thirst, enough to eat to satisfy their hunger, and let the ministerin angels guide them in the right way.

The third way - the one we have choosen for our orientation - is almost inaccessible and strewn with difficulties. The glance meets there only spines, rocks and ravines. But it contains some paths that those who have remote aimings have submitted to roadworks. One finds traces of wounded hands and feet to have provided a superhuman physical and moral effort.

By taking the responsibility for this project, we choose the way traced by these ambitious spirits, in spite of the sorrows which we could endure in the achievement of the task that was assigned to us. These are our guides who give us a big hand today thanks to their support to this review with the fruit of their ideas and the creativity of their literary production. They are the pioneers and the spearheads who pushed this project ahead to allow it to be at the service of the Moroccan letters and culture.

This is the orientation that we gave to the review "Al Taqafa Almaghribiya." And now, Said, sleep in peace. We promise to remain faithful to our principles, and here we are on the road which gives us a guarantee of supporting the literary and cultural objectives you had traced out. We - both you and I - tried to follow this way which will remain, after your departure, a target for the glance and a pleasure for the spirit. You can sleep with a quiet conscience and in all serenity. Whatever the circumstances are, I will always be among the intrepid ones who are not afraid of the sacrifice. 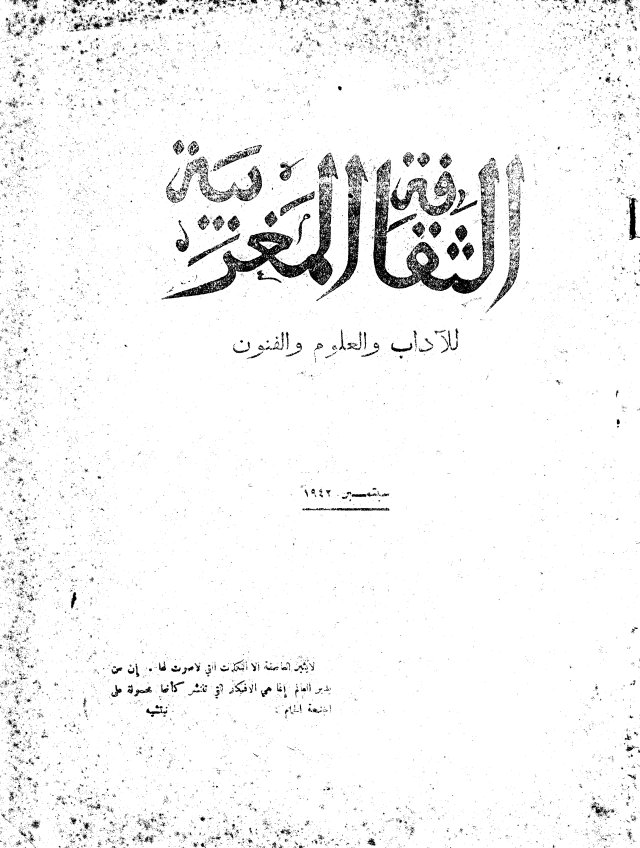